There are a number of different touchscreen technologies available in the marketplace today. Here, we try to summarise the main features, benefits and (possible) drawbacks for each technology type, to allow you to consider fully the implications of each product range.

A resistive touchscreen panel comprises several layers, the most important of which are two thin, transparent electrically-resistive layers separated by a thin space. These layers face each other; with a thin gap between. The top screen (the screen that is touched) has a coating on the underside surface of the screen. Just beneath it is a similar resistive layer on top of its substrate. 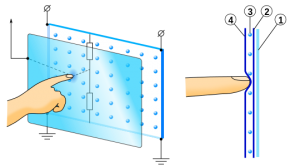 Drawing by Mercury13, CC BY-SA 3.0. One layer has conductive connections along its sides, the other along top and bottom. A voltage is applied to one layer, and sensed by the other. When an object, such as a fingertip or stylus tip, presses down on the outer surface, the two layers touch to become connected at that point: The panel then behaves as a pair of voltage dividers, one axis at a time. By rapidly switching between each layer, the position of a pressure on the screen can be read.

Resistive touch is used in restaurants, factories and hospitals due to its high resistance to liquids and contaminants. A major benefit of resistive touch technology is its low cost. Disadvantages include the need to press down, and a risk of damage by sharp objects. Resistive touchscreens also suffer from poorer contrast, due to having additional reflections from the extra layer of material placed over the screen.

A capacitive touchscreen panel consists of an insulator such as glass, coated with a transparent conductor such as indium tin oxide (ITO). As the human body is also an electrical conductor, touching the surface of the screen results in a distortion of the screen’s electrostatic field, measurable as a change in capacitance. Different technologies may be used to determine the location of the touch. The location is then sent to the controller for processing.

Unlike a resistive touchscreen, one cannot use a capacitive touchscreen through most types of electrically insulating material, such as gloves. This disadvantage especially affects usability in consumer electronics, such as touch tablet PCs and capacitive smartphones in cold weather. It can be overcome with a special capacitive stylus, or a special-application glove with an embroidered patch of conductive thread passing through it and contacting the user’s fingertip. 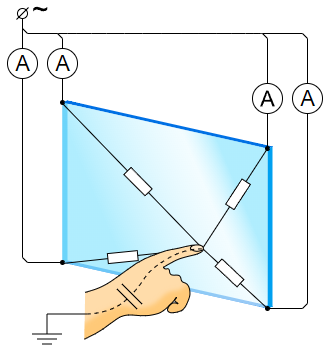 In this basic technology, only one side of the insulator is coated with a conductive layer. A small voltage is applied to the layer, resulting in a uniform electrostatic field. When a conductor, such as a human finger, touches the uncoated surface, a capacitor is dynamically formed. The sensor’s controller can determine the location of the touch indirectly from the change in the capacitance as measured from the four corners of the panel. As it has no moving parts, it is moderately durable but has limited resolution, is prone to false signals from parasitic capacitive coupling, and needs calibration during manufacture. It is therefore most often used in simple applications such as industrial controls and kiosks.

Projected Capacitive Touch (PCT; also PCAP) technology is a variant of capacitive touch technology. All PCT touch screens are made up of a matrix of rows and columns of conductive material,

layered on sheets of glass. This can be done either by etching a single conductive layer to form a grid pattern of electrodes, or by etching two separate, perpendicular layers of conductive material with parallel lines or tracks to form a grid. Voltage applied to this grid creates a uniform electrostatic field, which can be measured. When a conductive object, such as a finger, comes into contact with a PCT panel, it distorts the local electrostatic field at that point. This is measurable as a change in capacitance. If a finger bridges the gap between two of the “tracks,” the charge field is further interrupted and detected by the controller. The capacitance can be changed and measured at every individual point on the grid (intersection). Therefore, this system is able to accurately track touches. Due to the top layer of a PCT being glass, it is a more robust solution than less costly resistive touch technology. Additionally, unlike surface capacitive touch technology, it is possible for a PCT system to sense a passive stylus or gloved fingers. However, moisture on the surface of the panel, high humidity, or collected dust can interfere with the performance of a PCT system. There are two types of PCT: mutual capacitance and self-capacitance. 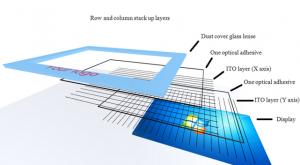 Infrared touch technology makes use of infrared light beams to detect the touch. A matrix of infrared beams ray over the panel. When an object blocks a light beam, a phototransistor will detect that and register the location of the touch. The technology features multi touch availability, can work on larger panels and can detect wet fingers or dirty gloves. IR touch kits can detect anything that can block the lights, so it is highly susceptible for the wrong detection of dust or insects. Direct sunlight can also affect the sensing capability.

For further information, or if you have any additional questions, please contact us at sales@eurocoincomponents.com.